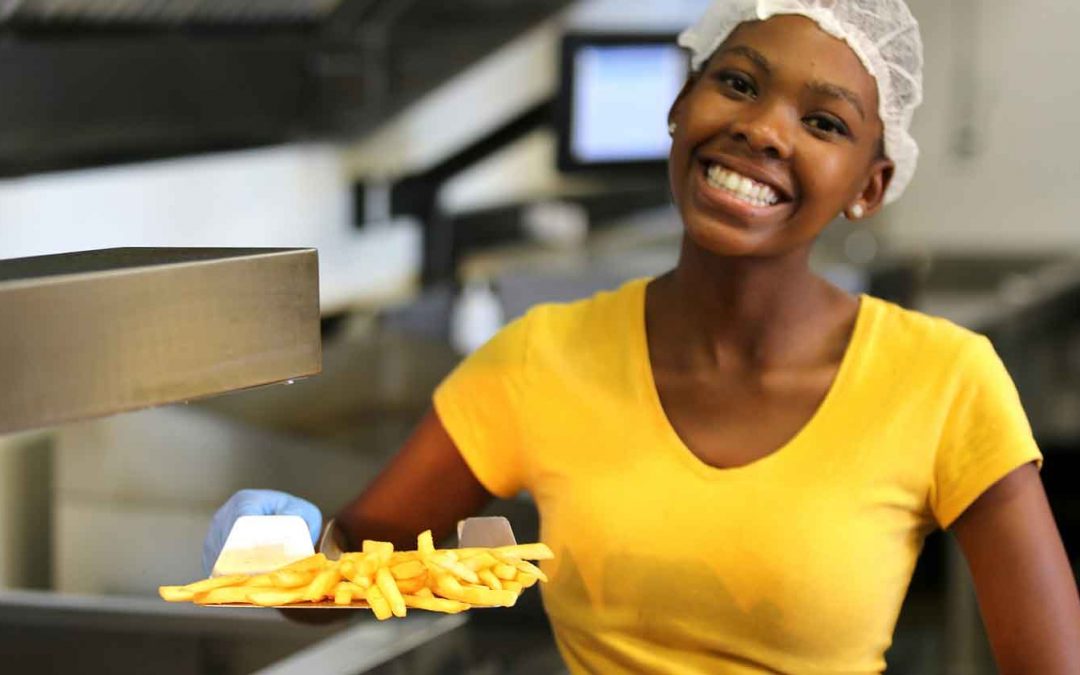 In the fight for greater gender equality and inclusion, governments, NGOs and other stakeholders are increasingly recognising the power of nudges to change human behaviour. The results are promising.

Ever heard the question: “Would you like fries with your burger?” or “Do you want to supersize that drink?”

You’ve been nudged. When you are presented with the option of adding something to your order without necessarily having thought of it before, you’ve been presented with a new choice to consider. Do I want it or not?

Since 2008, behavioural nudges have gained traction globally. Governments, such as in the United Kingdom, have set up Nudge Units to influence policy decisions, drive environmental issues, maximise tax compliance and influence better health choices, to name a few.

In 2016, the UK Government sent customized letters to 800 doctors stating: “80 percent of practices in your local area prescribe fewer antibiotics per head than yours,” offering three alternatives to antibiotic prescriptions instead. This trial led to 73,406 fewer antibiotic prescriptions and aseries of experiments to improve the collection of tax arrears, using information on peer compliance on tax regimes to improve collections.  It was so successful it was also replicated in Costa Rica and Poland.

By applying nudge theory and by instead placing large containers with chlorine solutions near water sources, the programme made the path of least resistance more available. The result? The uptake of chlorine solutions increased from 10% to 60%.

So, what is a nudge?

In the words of Richard Thaler and Cass Sunstein, authors of the influential 2008 book “Nudge: Improving Decisions about Health, Wealth, and Happiness”:

“A nudge […] is any aspect of the choice architecture that alters people’s behaviour in a predictable way without forbidding any options or significantly changing their economic incentives. […] The intervention must be easy and cheap to avoid. Nudges are not mandates. Putting fruit at eye level counts as a nudge. Banning junk food does not.”

Nudges have also received their fair share of criticism—with critics pointing out their coercive and infantilizing approach towards people’s behaviour. Others suggest that nudges are too short term, and that they are not powerful enough to shift systems and structural issues that led to challenges in the first place. However, we posit that nudges are not meant to act in isolation and are but one tool in a suite of interventions to target a range of issues.

Thoughtfully designed nudges can indeed act as a force for good, as exemplified below. But can nudges only work to shape consumer preferences or improve tax collection? We outline the case for including nudges in our arsenal of interventions to address the ever-greater need for gender inclusion, below.

The fight for gender equality just got worse

As Oxfam International puts it, COVID-19 is the “inequality virus,” rolling back decades of progress made on gender and racial inequality. The pandemic has also been dubbed as a she-cession, with the world’s nearly 750 million women working in the informal economy seeing a fall in incomes of almost 60%.

In South Africa alone, two-thirds of the three million jobs lost during the hardest phase of the lockdown were experienced by women. They were impacted by both school closures and additional child care obligations, and are losing their livelihoods faster because they are more exposed to economic sectors that were hardest hit—like tourism and retail. Lockdowns throughout the world have triggered a significant increase in gender-based violence—the “shadow pandemic” that has trailed the virus as second-wave cases surge and lockdowns return. In the UK, over just one weekend in March, calls to domestic violence helplines rose by 65%.

Now, more than ever we need practical and pragmatic solutions to help women across the globe deal with the gender inequities now exacerbated by the pandemic.

So, what could nudges offer in the way of addressing these challenges?

Trying to change human behaviour for a desired outcome is not a new idea. The proverbial “carrot and stick” approach has been used for centuries. But nudges may offer a new and possibly more effective approach to behavioural change. Instead of mandating behaviour, nudges offer people the ability to make their own decisions.

Lisa Kepniski and Tinna Nielsen’s Inclusion Nudges approach uses nudge principles to design more inclusive communities and organisations—helping reduce bias, enhance inclusive collaboration, and reduce discrimination. As they suggest: “knowing is not enough—designing for inclusion is a must.”

Harvard Kennedy School Professor Iris Bohnet’s book, “What works: Gender Equality by Design” offers yet another example of behaviour-based solutions. Bohnet provides insight into research-based tools that focus on debiasing organisations not individuals. Using an understanding of and experimenting with human behaviour, Bohnet proffers solutions that tilt hiring and promotions in favour of a more gender equitable approach in both boardrooms and classrooms.

COVID-19 has exposed the volatility of women’s precarious incomes, witnessed a rise in gender-based violence, and seen the return of gender norms and stereotypes that further lock women out of the labour market We discuss three examples of where nudges can be used to promote gender inclusivity—to reduce violence, increase job applications, and promote financial inclusion.

Nudge theory and its application has become a new approach to tackling gender based violence (GBV), which at least one in every three women experience during their lifetime (World Health Organisation).  Moreover most violence experienced by women is at the hands of an intimate partner. In fact, 38% of all women murdered globally is as a consequence of a relationship with their male intimate partner.

Ideas 42 is a not for profit organisation applying behavioural science to drive social change. To tackle the issue of Intimate partner Violence (IPV) in Chennai, India, the Ideas 42 team partnered with local organisations by targeting alcohol consumption through the Beautiful Home Project. Using the behavioural nudge of reciprocity (getting something in return for what I do), rickshaw drivers were offered the option of money remitted into a savings account to remain sober during their workday. This nudge in the form of a financial incentive reduced daytime drinking, and IPV dropped by 30%.

More encouragingly, when financial incentives were coupled with short couples therapy interventions, IPV reduced by 50% in the treatment group.

With the doubling and tripling of GBV over the course of the pandemic, this remains a pressing issue for society to address. Governments all over the world are providing toll-free hotlines as well as options for discreet/ no-dial phone options for those unable to call using regular phones. These initiatives can be amplified and further strengthened with nudge theory, and provide a valuable addition to the expansion of social and psychological support services.

Nudges can encourage more women to apply for work

Women in In the United Kingdom are much more likely than men to make the transition to part-time work after the birth of their first child (Behavioural Insights Team). But the move to a part-time role can be detrimental to their career prospects with many women working part-time failing to acquire promotions within the workplace. COVID-19’s lockdowns and ensuing school closures has meant that the burden of care has fallen disproportionately to women, with many women opting out of the workplace entirely.

Even before COVID-19, Zurich Insurance in the United Kingdom sought to understand and address the causes of their gender pay gap and to seek remedies. Baseline studies showed that part-time staff were 35% less likely to apply for promotions. This was primarily driven by the assumption that progression was not possible without an equivalent increase in the number of hours worked.

Nudge theory suggests that as human beings we are likely to choose a course of action that is easy and friction-free. So, Zurich Insurance switched the “default” option for all new job vacancies to become open to part-time workers, job-share and or full-time employees. Hiring Managers were able to “opt-out” of including part time workers as eligible for the role they wished to advertise. However, this was only possible if they could provide a solid substantiation for doing so.

Three changes were then made to the hiring process:

The nudge experiment ran for 12 months. Results showed a significant increase, 16.4% in the proportion of female applicants to roles at Zurich Insurance. Moreover, at a senior level the increase was even greater at 19.3%.

These nudges can be adapted in a COVID-19 world to encourage more women to return to the workplace in the face of additional care responsibilities.

With innovative experiments that encourage more flexible work-choices for women from the outset (at the application stage rather than in-employment), we could bias our global work-from-home experiment to instead make progress on the (re-)inclusion of women into the workplace.

Financial inclusion as a pathway out of poverty has also been at the centre of nudge design. Empowering women with financial autonomy can be achieved through better access to digital financial services, and in particular through platforms like mobile money. For female-headed households, mobile money has proved effective in encouraging the accumulation of savings and by facilitating the switch to a business occupation.

Moreover, only 13% of Pakistan’s people were utilising mobile money products. And whilst 20% of the men had mobile money, a mere 5% of women had.

Ideas 42, partnering with Women’s World Banking and Mobile Money provider Jazz Cash, whose female customer base was only 10-15%, conducted a series of nudge experiments. Using social norms, reciprocity (in the form of financial incentives) and text messages that were tested for greater appeal to women, for example by emphasizing their roles and context and more frequently using words like “sister” and “mother.” This was sent through a referral network, they targeted improved female financial inclusion. With the implementation of these nudges, it was projected that  new customers (via referrals) would increase by 31% and 10,000 of these would be women (full study here).

While nudges can be powerful and can shift one’s thinking, they need to be taken together with a suite of other programmes and interventions to affect deep and lasting change. When reducing barriers to women’s greater inclusion could be as simple as encouraging women to make referrals through text messages, making part time work a default option for hiring managers, or promoting reduced alcohol consumption and thus decreasing the risk of partner violence.

If we reimagine the world with women at the centre, perhaps we can tilt the world towards equality. Think about that the next time you hear “Do you want some fries with that?”

Source: This article was originally published on 5 February 2021 on https://femlab.co/2021/02/05/tilting-towards-equality-can-nudges-improve-gender-inclusion/. The piece was written by Helen Smith and Sharmi Surianarain of Harambee Youth Employment Accelerator.