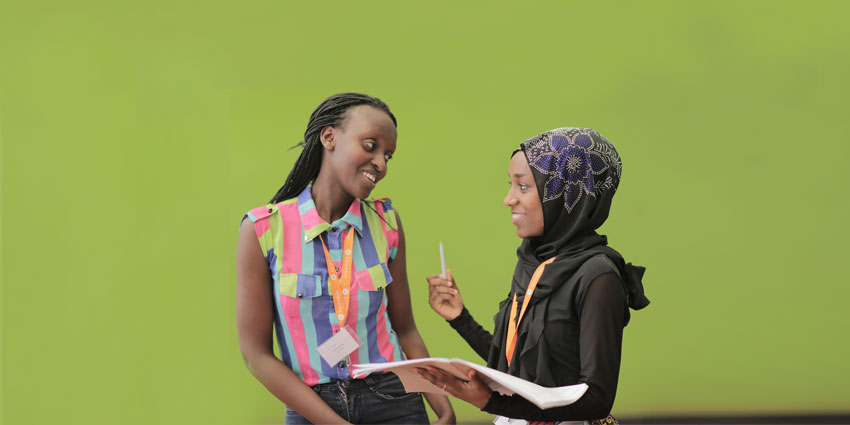 “One language is poverty,” Annah told us. “Two languages is wealth,” she said, breaking into a smile. For a young woman who has been on the job hunt for nearly a year, she understood that despite having everything else employers were looking for, speaking English was her ticket to the game.

And she was right.

Meetings with over 100 businesses – ranging from large employers to small entrepreneurs – reinforced that having staff who speak English well is essential to grow the services economy, fuel job creation and grow investment in the country. One said to us, “If you can’t understand English, you can’t go anywhere. It is the basis of everything.” Managers are also looking for digital literacy, the right workplace behaviours and confidence in their hires – but English is the game changer.

In 2008, Rwanda’s schooling system switched – nearly overnight – from instruction in French to instruction in English. This required the students, i.e. young people, to do a lot of catching up. Our data from working with nearly 2,000 youth shows that more than half of them can’t hold a conversation in English once they veer away from familiar topics. This is a massive challenge for a country where 70% of people are under the age of 35.

Think big, start small. One of our biggest lessons learned from Lean Impact.

We started by learning from another case study in the Lean Impact book. Revolution English is an American organization that teaches English as a second language to immigrants and refugees. We called Peter Murray, the founder, who was excited to iterate with us in making their model work in an African context.

First, we had to solve for the fact that Rwandan young people have very little exposure to English in their everyday lives (very different than being an immigrant in America surrounded by English). Then we had to design for an alternative delivery model as Revolution English’s technology platform requires downloading content that was going to be too data heavy and expensive for our youth. Finally, our biggest learning from Peter was that self-driven language acquisition is most successful using engaging content (no one wants to spend hours repeating “the dog walked across the street”). We weren’t convinced the Hollywood content used for their American students would also ‘hook’ the interests of young people in Kigali.

Harambee’s candidates were living in a sea of Kinyarwanda, their mother tongue. So we created an ‘immersive’ island where they would speak only English for more than eight hours a day. We layered in Harambee’s behavior change model to drive a switch from seeing this as a ‘language class’ to developing the tools they needed to correct each other’s mistakes, and to stay resilient when they made mistakes. This was particularly important to lift up the voices of the young women, and to grow everyone’s confidence in the scary journey of learning a new language.

The biggest unknown was what content would ‘hook’ them. We learned from Peter that TV sitcoms were ideal for the “listen, watch, repeat” method of language acquisition. We didn’t guess which sitcom to use, we asked our customers. They picked Friends and proved to us the right content is king, happily spending up to four hours using the “listen, watch, repeat” method with Rachel, Ross, Monica, Chandler, Joey and Phoebe.

We started with a small group of 30. Since we didn’t know exactly how it would work, we committed to a “just in time” design principle, and started with only two days of content developed. (Imagine trying to explain that to a funder!) Initially we used our customers as the primary measure of how well we were doing. Daily feedback forms provided us with key insights on the facilitators, content, and delivery channels. This allowed us to iterate in real time until we found what was working.

While this design principle worked well, our team was stretched and we had to learn how to fail forward and fix fast. Knowing what to fix meant having eyes on the ground paying close attention to levels of engagement, and having the design team regularly visit the program to observe effectiveness from idea to delivery. As a result, it only took five days to figure out the curriculum was too reliant on a facilitator if we wanted to scale it up, and we needed to pivot to more self-directed work.

When we started, the young people were very soft-spoken and reserved, highlighting just how scary it is to speak up in an unfamiliar language. We started brainstorming ideas on how to shift this and get them more comfortable with raising their voices. We tried a few different things, one of them was to include a “debate” on which character in Friends would make the best parent. To our pleasant surprise, this was a game changer. The facilitator that day excitedly sent a Whatsapp saying the voices were confident, loud and opinionated – and that Joey was in the lead with Rachel hot on his heels! Once we discovered young Rwandans love a good debate, we added in frequent debate sessions on topics that energized them.

We were more convinced than ever that interesting content transforms and accelerates language learning! This led us to trial a “menu type” approach to podcasts as another way to drive self-directed learning that would captivate young people’s attention. They could “order” their own podcasts on topics ranging from gospel to hip-hop to current affairs. While they directed their learning, we curated the bank of content.

In four weeks, we were able to see and measure real acceleration of spoken English. Verdaste, known to be a quiet candidate who produced little English in the program, shared from a job interview the past week, “I had all these ideas,” he said, “I just couldn’t say them in English. I feel like I can now.” We’ve also gotten a vote of confidence from businesses with 80% of the pilot group either hired or in job interviews now. Employers are commenting positively on the poise and confidence they see in these young people.

We are busy improving for a second iteration, changing our baseline assessment and developing a more reliable market tool to measure spoken English. Watch this space!

This article was published by Lean Impact and can be found online here.

Ryan Strategic Advisory says that now is the time for big ideas about how new ways of doing business in CX and BPO can drive positive social change.